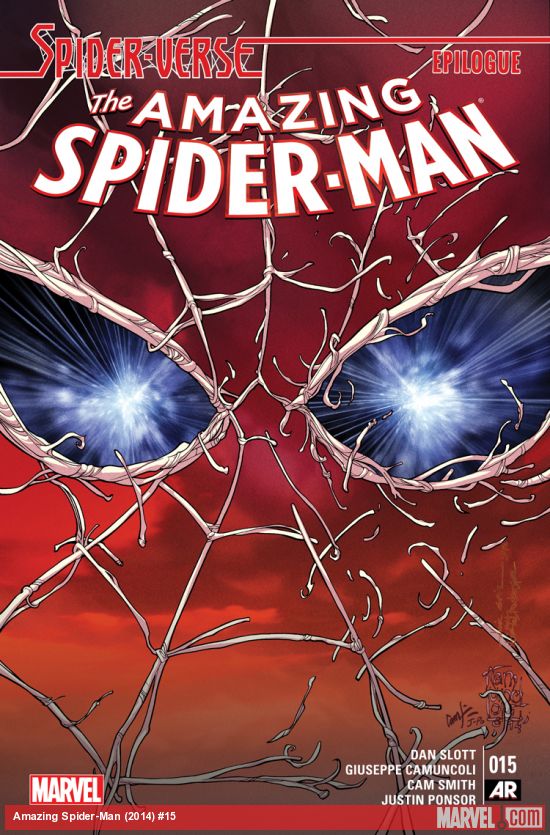 Spoilers: Keep in mind that my method of reviewing involves spoilers for purposes of analysis. If you care about being spoiled and have not read Amazing Spider-Man #15 yet, please avoid this review until you do!

If you had it in your head that I never dislike a book, this review should fix that. Amazing Spider-Man #15 isn’t a BAD issue, really. There’s just not really anything exceptional about it. It’s an epilogue and, as such, is prone to being a bit on the dull side. Everyone returns to their home worlds, and life moves on. There is a brief confrontation with Otto as he tries to sabotage the fabric of reality by cutting up the Great Web, which leads to some interesting and unexpected character development on his part, as he realizes that going back to his time means dooming himself to die and become Peter Parker again. His justification, “Don’t you understand? My world needs me! I was its BEST Spider-Man,” feels in character for him and also gives him more complex motivation than one would expect. Then again, Otto is also destroying the fabric of time… so he isn’t doing much to ensure the safety of his world or his return to it, which is one of the reasons why this conflict seems a bit strange to me. Comics, though, are strange, and there have been weirder character motivations.

The highlight of this book, though, is the startling realization that Spider-UK’s world is gone because The Incursion destroyed it. Once that is revealed, Billy Braddock realizes that his choice to help the other Spiders meant sacrificing his world and his fellow Captain Britain Corpsmen. This has the effect of giving this whole Spider-Verse event more weight. It has a lasting negative consequence. Though, as Peter is quick to point out, without Spider-UK gathering up all the Spiders, they would likely have lost. It was a choice (albeit one he did not know he was choosing) between his world and Corpsmen, and the existence of Spiders from all realities. In the wake of the consequences of his actions, Braddock’s decision to become the Spider-Man of the multiverse, so to speak, is even more powerful. He couldn’t save his world, but he will take what he gained from what he did save (the Spider-Verse) and help those worlds that lost their Spider-Man/Woman to the inheritors. Anya’s decision to stay, as well (under the amusingly meta justification that “Every time I turn around there’s a new Spider-Girl”) feels like a step in the right direction. Marvel is essentially saying, “The world needs both a Spider-Man and a Spider-Woman. She is as important as he is.”

Overall, this issue was about as good as I expected. The thrust of the action is over, and they just needed another 22 pages to tie-up loose ends, which is what they did. The fact that I knew what to expect, though, doesn’t stop it from being by far the worst book of the four I read this month. I would even go so far as to say it is largely unnecessary. Readers know what is going to happen at the end of the event, and, except for the removal of Anya Corazon from Earth-616, none of the outcomes of this book are going to significantly change anything for Marvel readers. That said, if you read and enjoyed the rest of Spider-Verse, you’ll probably read this one too, and enjoy it well enough.

This entry was posted in Comic Reviews and tagged Amazing Spider-Man, Comic, Review. Bookmark the permalink.