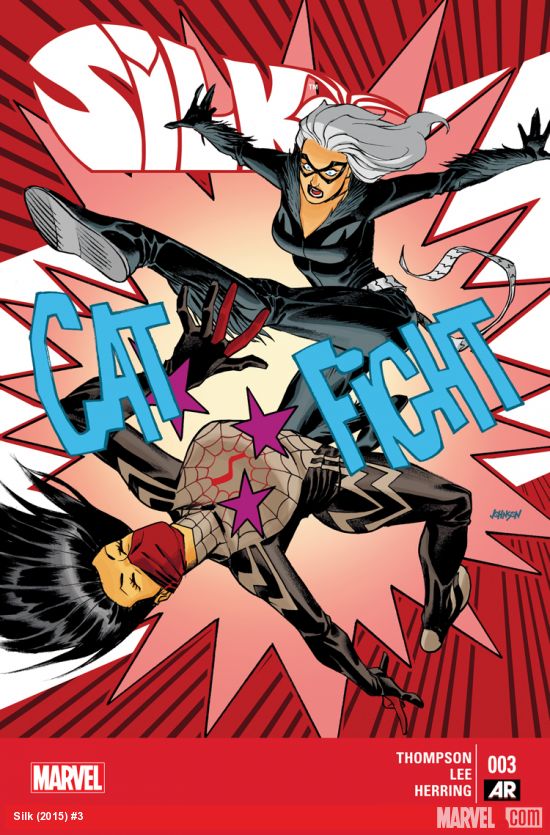 Spoilers: Keep in mind that my method of reviewing involves spoilers for purposes of analysis. If you care about being spoiled and have not read Silk #3 yet, please avoid this review until you do!!

So… in order to talk about this comic, I want to talk about television for a bit. So I watch a fair number of TV shows per week. I watch The Flash, Arrow, Agents of Shield, Game of Thrones, iZombie, and Brooklyn 99. Of those shows, the show that I will watch no matter how stressed out my life is, is Brooklyn 99. That’s because that show never fails to be a pick-me-up. I never have to worry that someone important will die, or that there will be some weird dramatic depressing thing that happens that will bring me down. Silk is the Brooklyn 99 of comics. There’s some dark stuff in the background, sure, but the issues themselves never fail to leave me feeling cheerful afterwards. Cindy is funny, the jokes are fresh, and the art style is fun. She does Spider-Man better than Spider-Man does right now. This third issue reflects that all the way. It opens (after an initial full-page spread of Cindy crashed on the office floor saying “Ow.”) with a fight between her and the newly remade “Dragonclaw” who is now known as “Rage” (both of which are Pokémon moves, by the way, so Cindy’s Pokémon jokes are dead on). This fight is full of fun banter and action. It is some of the most fun I’ve had reading a fight in a Spider comic since the Spider-Verse event.

There’s something else going on in this fight, though. Remember last month’s issue, where I said that the structure didn’t work, because the way the used the flashbacks broke the action in a weird way and made me not care anymore? This issue has the same idea. It flashes back to a time when Cindy was fighting Ezekiel in the bunker (because she was mad at him locking her up in there). The difference is, this time the flash backs are alternated panel by panel with the present day fight with Rage. This is WAY more effective. It makes both fights seem faster and more intense, and you never stop caring about either fight, because you are always being updated on them. It also shows development on Cindy’s part (both as a fighter and as a person), and shows you why she might give Rage a second chance, once he confesses about his tragic situation as a single father, that is. After all, Cindy, unsurprisingly, has a soft spot for sob stories about families.

The cover of this issue promises a fight with Black Cat, and, while it delivers, it didn’t make me care much about that particular fight. That fight doesn’t engage me the way that the previous fight with Rage does. Although, the fight with Black Cat does serve to continue to link Felicia’s story (which we are constantly being updated on in ASM) with Cindy’s and show where everyone stands in relation to each other. The scene towards the end of the comic of Black Cat putting together a team to take Silk out unfortunately seems to promise an end to the non-stop good times in this comic. Spider-Man writers, though, have been navigating humor and tragedy for over 50 years, so I am confident it will continue to be a great title. Overall, a good book that delivers exactly what I wanted out of March’s issue and didn’t get.

This entry was posted in Comic Reviews and tagged Comic, Review, Silk. Bookmark the permalink.