This analysis of the DC Universe Rebirth event comic contains MAJOR spoilers about the comic! If you have not read it and care about spoilers, do NOT read further. You have been warned!

So a couple weeks back the event issue for DC Rebirth dropped, and it was one of the best individual comic issues I read all year. It was followed last week by four individual #1 comics, and we are getting the second round tomorrow. I’ll tackle where the individual series issues stand later this week, but for now, let’s talk about that event issue.

The DC Rebirth event comic is phenomenal single issue of a comic, but that is a somewhat misleading categorization. At 80-pages, this is more like a graphic novella than an individual issue, and it reads that way, too. The plot follows pre-New 52 Wally West as he tries desperately to fight his way out of the speed force and into the new universe that has been created in the wake of Flashpoint, in order to warn people of the time and relationships that were lost in that event. I want to stop for a moment to talk about how clever this whole set-up is.

DC promised that Rebirth was not a reboot, and no one believed them. But it’s actually kind of true. There is no reboot happening. What we are seeing, instead, is a reconstruction of a universe from within the universe itself.  Wally West even makes a comment about the dark state of the DC Universe that borders on fourth wall breaking. 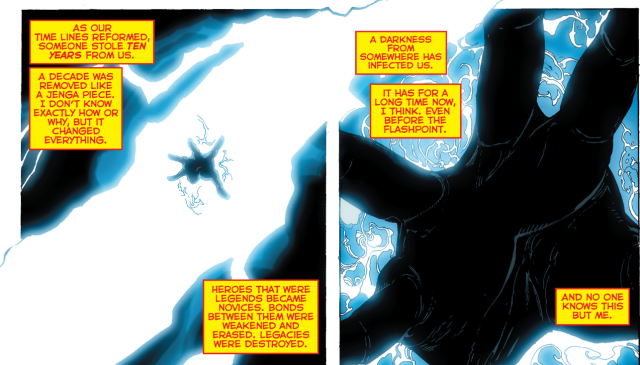 What a great way to crystallize what is happening here. The New 52 brought this strange darkness to the DC Universe in an effort to make comics more mature and serious. Some good comics came out of that. Don’t get me wrong, but generally speaking DC comics lost a lot of the heart that made them great. We lost the relationships that made these characters feel human, and there was a certain degree of missing escapism, which, ultimately, is the purpose of reading comic books. Wally hits on that here. That’s amazing, because it makes it clear that even within the universe itself the change from light to dark is apparent and the negative impacts of that are felt by these characters. This is all a sort of a low-key version of what we talk about when we discuss whether or not the moral center of a novel agrees with problematic portions of its narrative: If there is sexism, or racism or homophobia, does the moral center of the novel support it or not? Here, we are seeing a shift in the moral center of the DC Universe from one that did support this dark, bleak universe to one that sees it as a problem that needs to be fixed.

So that was great, but what really made this comic impressive was the way the narrative is structured. It’s a perfectly self-contained story with a wonderful arc. Wally is drawn to those he believes have a chance to remember the world they lost. He is drawn to Bruce Wayne, Johnny Thunder, and Linda Park, as well as catching glimpses of other heroes whose legacy is being passed down, reminding Wally that there is hope. And then, finally, he is drawn to Barry Allen. The final meeting with Barry Allen is so sad and heart-wretching and when…

Barry finally does recognize Wally and pulls him out of the speed force, therefore showing the power of remembering what was lost, it feels like an earned reward, rather than a contrived resolution. That’s what makes this such an amazing story.

Finally, we have to talk about the BIG reveal and what it means for the DC Universe.

The idea of adding Watchmen to the DC Universe by way of an almost literal invasion is one that I have gone back and forth on my feelings on. The first thing I will say is that was a legitimately surprising twist. I actually went “WHAT!?” when I saw it, and I think I may have laughed at how shocking it was. This is a seriously big thing for DC to keep under wraps, but is it good for the universe? I’m going to go with “Yes.” Here’s why: We have already established in this comic that what was done to the DC Universe with the New 52 was “bad” for the universe. Creating an external threat as the cause for that event is a smart move. It further distances the source of these negative impacts from our heroes, and it gives them something to blame and fight against. Further, Watchmen on its own is a dark, bleak superhero universe, so the idea of the involvement of Watchmen making the DC Universe similarly dark and bleak adds a nice level of clever irony. So, in the end, I am excited about this and I’m thrilled to see what they do with it.

This comic does seem to fail in one major respect, though. I’m not sure it does a great job of setting up the Rebirth event, itself. I’m still not sure exactly how all the changes we are going to see are going to happen. I would gather from this comic that they are happening in different ways throughout the universe, and I suppose that DC, in the end, didn’t intend for this comic to set the event up in a significant way. That said, I am not the only one who went into this comic expecting a significant level of explanation and set-up, so I do feel justified in my disappointment that I didn’t feel like I knew what was happening in the end. Still, I would rather have an excellent comic with a somewhat uneven event set-up than a good event set-up in a bad comic (which is FAR more common), so I am very pleased with this issue. If you can still find it somewhere, and you haven’t read it, pick it up!

This entry was posted in Comic Reviews, Uncategorized and tagged Comic, Rebirth, Review. Bookmark the permalink.